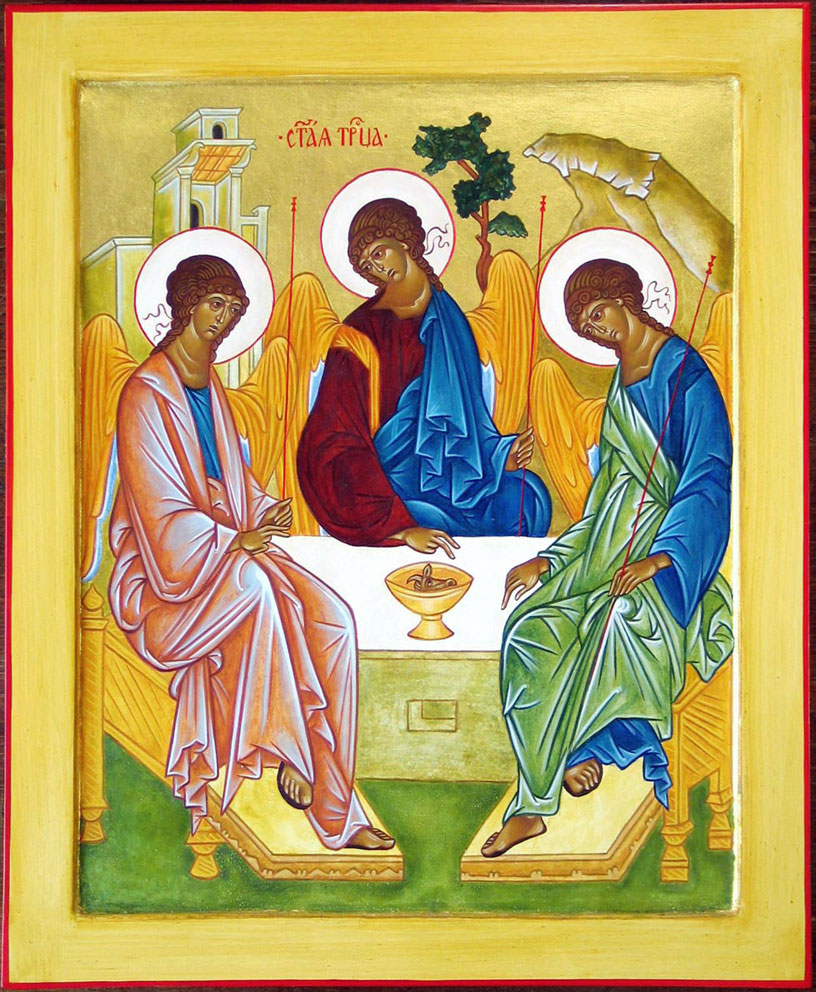 I have a long-standing tacit debate going with my mother and my mother-in-law. It involves the reach of Church doctrine — because why wouldn’t it? My mom-in-law puts it in more immediate, community-minded terms; namely, how essential do we want to make something like, say, the Trinity, if the general population of the Church “doesn’t get it”? My own mother’s terms are a bit more pastoral: “Put the hay down where the horses can get to it.”

My general response cites a failure of Christian education and that we don’t think highly enough of the laity, and in large degree I still think this is true. Amos, after all, was an Ancient Near-Eastern farmer who levied a socio-economic critique so scathing that it would have bowled over Marx himself. Radical critiques of Church history typically read modern systems of power/knowledge onto early doctrinal developments and presume that one-tenth of one percent has always dictated the terms of knowledge. But I think it’s reductive to say that the Trinity (might as well stay consistent) emerged from these same sorts of power dynamics. It wasn’t some mystifying element held over the heads of the faithful in order to create a divide between them and the reigning hierarchy. Yes, at the Council of Nicaea the Church was represented by a fairly small number of men, but by many accounts only an astonishing half of one percent dissented from the view which would then under-gird the doctrine of the Trinity and become “orthodox.” To me, this indicates that the doctrine was far from incomprehensible to the people whom these men represented at the council — So why should our thoughts on that change now?

Perhaps they shouldn’t. But that doesn’t render the question unproblematic; in fact, the problem may well lie elsewhere, in the question my mom-in-law consistently poses: what happens if you can’t “grasp” something so essential?

In Radical Hermeneutics (1987), John D. Caputo attempts to re-think the entire foundation of knowledge, reason, and the roles they play in our lives. Extending the legacy of philosopher Jacques Derrida and his theory of deconstruction, Caputo advocates a kind of thinking which “exposes itself to the twilight world of ambiguous and undecidable figures”:

Its role is not so much to “come to grips” with [mystery]–that is the metaphorics of grasping, and we have insisted on [mystery’s] ability to elude our grip–as it is to cope with or, best of all, to stay in play with it. (271)

Here, Caputo suggests that “grasping” is the wrong way to go about learning. Throughout his study, Caputo makes a number of adjustments in how he discusses knowledge: the Latin veritas, an object of conquest and loaded with certainties, gives way to an older notion, the Greek aletheia which discloses itself, generously opening itself to inquiry without giving everything away. Heidegger resources aletheia in his thought, but Caputo wants to radicalize such disclosure into a-letheia. What is disclosed, for Caputo, is the lethe at the heart of all thinking; not a foundational reality which coquettishly gives us peaks of itself but one which opens itself up completely to reveal that, underneath, there is nothing but flux, change, and chaos. This flux, Caputo believes, is what the German mystic Meister Eckhart has in mind when he described “Godhead,” as resourced in Heidegger:

Heidegger’s first, last, and constant thought, in my view, is that thinking is in the end directed at that lethic dimension, that the de-limitation of conceptual thinking issues in a Gelassenheit toward the lethe, the concealed heart of a-letheia, the mystery which withdraws, which never hands itself over in a form we can trust. (271)

Caputo dances beautifully across the mystical sublime, the “abyss” which accompanies the overwhelming reality of what we call God. But there are other interventions to be made here. I will leave it to Luke Ferretter to describe Caputo’s misreadings of Eckhart and the tradition to which he belonged; more imminently, one must consider what to make of Caputo’s claim that the lethe, or what Eckhart called “Godhead,” “never hands itself over in a form we can trust.”

Christianity, of course, is proceeds from a different wager: it believes that, in fact, Godhead handed itself over in a form that we can trust; the person of Jesus Christ and, secondarily, in the plural testimonies contained in what we call Scripture and the interpretive traditions of the Church (however fragile that canon may be; you can consult Colby Dickinson on that one). The core of Christianity is the belief that the “abyss” beneath the name of God has conceded to name itself God the Father Almighty, Maker of Heaven and Earth. God puts Godself in play with us materially, historically, making a wager of trust something like possible.

So while I do not believe that Caputo’s “religion without religion” is representative of historic Christianity (nor can it be in any real way), I do want to retain a part of his critique; in this case, his critique of “the metaphorics of grasping.” With Caputo, I agree that language, always the first ingress into our Being, often constitutes the realities in which we live. Insofar as the “metaphorics of grasping” are operative within our discussions of doctrine, there is a constitutive project at work which places us in active relationship to the passivity of God and his nature. Under such dynamics, the privilege will indeed belong to those who are able to “grasp” God, who “get it,” and it will fall to those who cannot to fall in line behind those who can. This creates an economy of power in which those who “get it” merely have to accuse a dissenter of not getting it, an accusation which has no hope of being rebutted because those who “get it” already control the terms of the debate. Practically, this produces situations like our current crisis in Christian education, where doctrine is merely repeated ad nauseum in terms which no one understands anymore, the bludgeon by which the powerful mark themselves off from those who “just don’t get it.”

So what can we do about this? How can we change it, and avoid this sort of toxicity? For one, I am more than satisfied exchanging veritas for Heidegger’s aletheia without making Caputo’s enormous leap into the lethe. This is a conservatism for which he would fault me mightily, but so be it; I see no need to make such a leap. What I do see, however, is that this move returns God to the active position, free to place Godself under disclosure. We take an active role in this as well, watching for events of such self-disclosure and communication by which this God would make itself known, and not to a privileged few but to all people (Isaiah 65:1).

Where, then, heresy? This is something that I will need a long time to sort out, but by way of a preliminary answer, I would argue that, under the “metaphorics of grasping,”accusations of heresy become a means by which to marginalize and manage those who are unable to “grasp” and yet continue to speak as though they do. Privilege of interpretation belongs to those who “get it,” while others are kept in line, warned not to speak beyond their place and unable to defend their dissents against the tribunal. But in accounts of the early Church, unless we read them with the most uncharitable of suspicion (a popular and academically “sexy” move to be sure), this isn’t how we see “heresy” at work. Rather, “heresy” tends to be a pretty active project; rather than being the mere failure to apprehend part of what power has decreed to be knowledge, heresy involves a deliberate rejection, an active misreading, or an over-emphasis of something else. In his feud with Athanasius, Arias did not merely “fail to grasp” the teaching that Christ was both human and divine, rather he insisted on emphasizing the humanness of Christ such that his divinity was effaced. In this case Arias could be accused of “grasping” — veritas — where it was not right to grasp, reaching beyond what God had seen fit to disclose about himself — aletheia.

If we excise or invert the metaphorics of grasping, there is, I think, an opportunity to reconsider the terms. Church dogmatics is not a veritas, a confident “grasping” of what has attempted to stay hidden from us. But neither should dogma be a merely provisional, skittish “construal” of that which “never hands itself over in a form we can trust.” Rather, dogma emerges from a desire to respond to aletheia, to that which God has seen fit to reveal about himself. Aletheia is democratic, and so dogma at its best is the communal response to God’s self disclosure. It says, “Yes, we have all seen the same thing, and though we may not understand it we trust the One who has shown it, and those who have seen the same things before us. It is enough, for now.” Dogma, when it finds its foundation in the community, is democratic because it finds its expression in response to aletheia, and because it is democratic it is also sparse, humble, and yet deadly serious, “valuable for teaching the truth, convicting of sin, correcting faults and training in right living” (c.f. 2 Timothy 3:16). Orthodoxy is orthodoxy precisely because it “sets the hay down where the horses can get to it.” Under this rubric, it is what we call heresy, and not orthodoxy, which repeats the violence of the “metaphorics of grasping” in its dissatisfaction with aletheia and instead reaches for novelty and power, either in the certainty of veritas or the gnosticism of pure lethe. It denies God’s freedom to be responsible for Godself, and denies that Christ is trustworthy enough to reveal himself in a self-consistent way which creates a humbly normative framework by which the entire community can understand itself. A proper dogmatics, responding to revelation, should be assure along with Czeslaw Milosz that, “The errors and childish imaginings of the explorers / Of mysteries should be forgiven.”

Under this reading, heresy rather than orthodoxy is an exercise in the illiberal and undemocratic; dogma is liberated, freed to be the curation of a communal voice. But the believed-in self-consistency of God as communicated by that dogma does not (indeed must not) close down the play, the messianic possibilities of the Spirit. Whereas Caputo sees all as play, as lethe, the Christian sees this as a play with purpose, the play of a person, a divine person in communication with (all) human persons, and this divine person is absolutely free. But this person is also good and trustworthy, and it is ultimately that belief which guards against what I have described above becoming a simple reversal, an inversion of terms which ultimately maintains the same power structure. Caputo himself admits that all such “displacements” are dangerous in precisely this way, no matter who is performing them. Lest we fall prey to this danger, we must remain open to that same messianic “play” by which God-in-Christ overturned the Law of Moses and undermined the theology of the Jews. The free play of the Holy Spirit may, indeed, leave our own conceptualizations and construals undermined at times, but that freedom does not bespeak of a lethe which leaves us cast adrift. We and our ever-fragile dogmatics are, rather, left with a single consolation: ADONAI, God of the spirits of the prophets, is true and trustworthy (c.f. Revelation 22:6).

I am a PhD-er at Loyola University Chicago studying the interplay between modern Catholic thought, critical theory, and contemporary literature. I don't know what any of it means either. I read about art, faith, and culture, and these are all my footnotes. View all posts by Lyle Enright

I am a PhD-er at Loyola University Chicago studying the interplay between modern Catholic thought, critical theory, and contemporary literature. I don't know what any of it means either. I read about art, faith, and culture, and these are all my footnotes.